On Time Ambulance Defibrillation Save 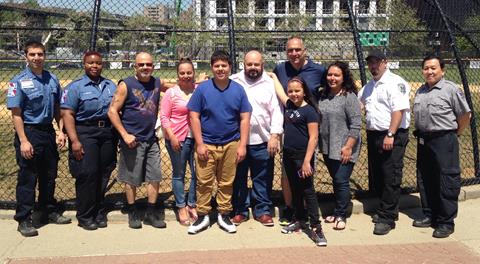 On May 7, 2015, On Time had the pleasure of commending; EMT Steven Valentin, EMT Romeo Lim, two Jersey City Medical Center EMTs, and several bystanders for their quick heroic actions when a Jersey City resident was having a heart attack in a baseball field. We were so delighted by the turn out at the award ceremony. Everyone from the coach of the baseball team to the Director of Jersey City Medical EMS, attended to show their support.

On April 23rd at approximately 6:30pm, Steven Valentin and Romeo Lim were heading back to base at the end of their shift when they were flagged down by Julio Maldonado who stated that a man had collapsed to the ground in a nearby baseball field. Julio Maldonado believed the gentleman was having a heart attack. Steven and Romeo rushed to the scene where they found 55 year old Carlos Vazquez lying unconscious and not breathing. Two bystanders had already started CPR (Cardio Pulmonary Resuscitation) when the crew arrived. Steven and Romeo immediately jumped into action taking over (CPR) and providing the oxygen he needed to survive. An AED was then placed on Carlos's chest where a "shock advised" was authorized. One shock was delivered and Carlos's body color began to return and several seconds later he became responsive. Shortly after, Jersey City Medical Center EMS and ALS (Advanced Life Support) arrived, treated him with medications and transported Carlos Vazquez to Christ Hospital.

Prior to the incident Carlos and his children were on their way to a baseball game for his daughter. When their car broke down about a mile from the field, they began to walk faster than normal to avoid missing the baseball game. After arriving and meeting up with friends and family, Carlos stated that he was looking at the fence and it appeared to be melting before his eyes. At this point he collapsed to the ground, only to awaken with On Time EMTs and family treating him.

Joe Borer, Director of North Jersey Operations for On Time Transport, continued to stay in touch with Carlos and his family after he was admitted to the hospital where he underwent surgery for a pace maker. Today, we can gladly say Carlos is out of the hospital and resting at home with his family. Since the incident we have found out that one of the bystanders, Deena Carattini, who assisted with CPR, plans on becoming an EMT this year. We hope that the quick heroic actions of our EMTs inspired her. Furthermore, Carlos and his family happily attended the ceremony where he was surrounded by the gentlemen who saved his life.