Last year on our blog, we shared the story of Carlos Vazquez, a Jersey City man who on the evening of April 23rd, 2015 went into cardiac arrest and collapsed at Enos Jones Park while watching his daughter’s softball game.

Meanwhile, Mr. Vazquez’s friend, Julio Maldonado, 60, remembered that he knew of an ambulance company right up the street. He immediately took off sprinting towards our Jersey City location at 34 Division Street.

When Maldonaldo arrived at our station he alerted EMTs Steven Valentin and Romeo Lim who grabbed a defibrillator kit and followed him back to the park.

By the time Valentin and Lim arrived on scene, Marto, Genao, and Morales had managed to stabilize Mr. Vazquez. EMTs from Jersey City Medical Center – Barnabas Health arrived shortly thereafter and brought Mr. Vazquez to the hospital where he was fitted with a pacemaker.

“I just sprung into action,” Deena Genao said. “I didn’t think too much, I just knew that was what was needed at that moment.”

The events of that day inspired Ms. Genao to become a first responder and she is now a full time EMT working at On Time Ambulance.

“I think that day made me realize that this is my calling. I’m thrilled to be in a career where I get to help people in their times of greatest need.”

“She did a tremendous job that day,” EMT Steve Valentin said. “They did everything right in those critical first few minutes.”

Asked about the ordeal, Mr. Vazquez told the Jersey Journal, “It’s something I’ll never forget. It feels beautiful to see how many friends I have.”

Deena: we are incredibly proud to have you on the team! 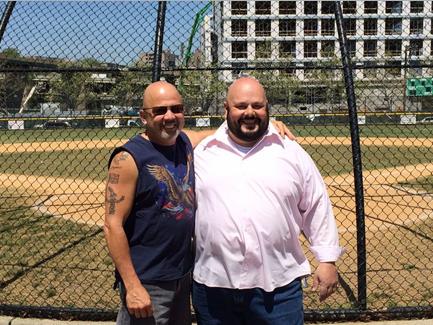