The Politics of Upgrading NJ's 911 System

It’s never been more important to upgrade and optimize our 911 system for cell phones. Seventy percent of emergency calls now come in that way. We also need to be able to text, send pictures, and give dispatchers the ability to geo-locate cell phones like is available in many other states.

You can currently text 911 in some counties in NJ. But the system, developed in the 1980s, cannot track where exactly the calls or texts come from. It can only provide a range. The whole grid needs to be revamped for it to work more efficiently. 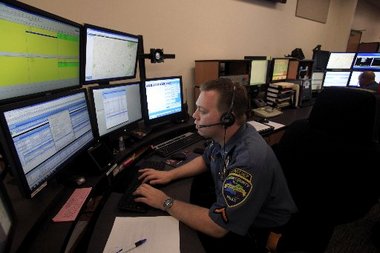 A 911 dispatcher takes a call at a new facility in Westfield, NJ. Photo by Jennifer Brown / The Star Ledger

In NJ, a $10.80 911 tax comes out of each cell phone bill each year. That started back in 2005. The promise was that that money would go towards building a brand new, modern, tech-savvy 911 system built to save lives.

The only problem is: that didn’t exactly happen.

Instead, only $42 million or 3% of the total $1.37 billion that was collected went towards the 911 system. Of this, almost all went to simply maintaining the current setup, rather than making the upgrades. This means that New Jersey still has what many consider to be a woefully inadequate 911 system.

Deciding what money goes where in the state budget is of course extremely political. But it seems that we should prioritize a 911 system above other items. The only way to guarantee that the tax would actually go towards the 911 system would be a constitutional amendment. Does it need to come to that? Can we find a way to put this new system into place? Or will we remain with the status quo until something tragic and preventable happens?

The FCC has said that the new system, named NextGen 911, would save up to 10,000 lives annually across the country and result in total savings of about $92 billion.